The Jesus Movement was a counterculture Christian youth revolution that emerged in the United States during the late 1960s and early 1970s. This change in the American religious landscape corresponded with a period of social upheaval in the youth culture of these two decades, which was a time of protest, uncertainty, and rebellion against societal norms.

During this era, many young people experimented with psychedelic drugs and sought to expand their consciousness through experimentation with Eastern mysticism and occult religions. In their ideological opposition to the current social institutions, including the Christian church, they sought various methods of protest. They were labeled “flower children” because they wore flowers and distributed flower-themed ornaments to represent their ideals of peace, joy, love, and universal belonging. Young men and women alike let their hair grow long, wore love beads, and listened to rock music. 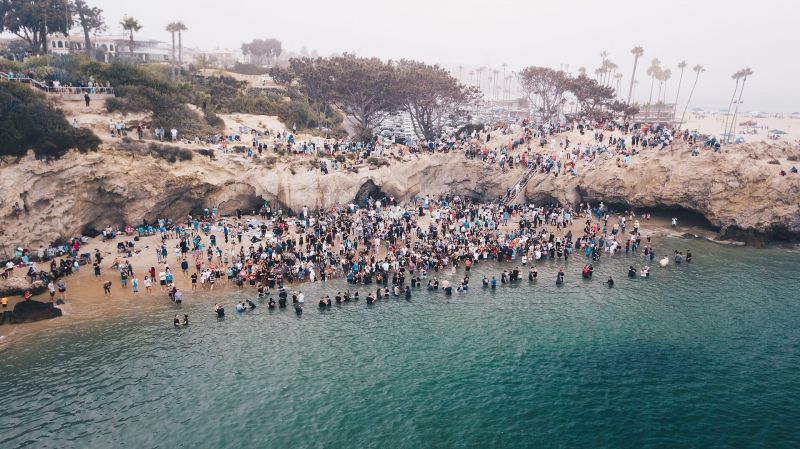 In their pursuit of happiness and a cultural utopia, many of these young people came to faith in Jesus Christ, giving birth to the Jesus Movement, also known as the “Jesus revolution” and the “Jesus People Movement.” Because so many of these converts had been drug addicts and street people, they were often called “Jesus freaks.” But not all who joined the Jesus Movement were former drug users and hippies. Many young people left conventional Christian churches in search of more fulfilling spiritual experiences amid the excitement and transformation of this new movement of Christian renewal.

While the growth of the Jesus Movement was disorganized and diverse, with many scattered subgroups, participants in the spiritual awakening shared common characteristics. Perhaps most apparent were the movement’s intense evangelistic fervor and stress on experience and emotion over doctrine. As part of their anti-establishment shift, the Jesus Movement pushed away from the norms of institutional religious expression. One widespread aspect of their unconventional lifestyle involved communal living. The Jesus people’s worldview opposed intellectualism and conventional social values of the time. Many old-school Christians criticized the Jesus Movement for being too simplistic.

In protest of traditional religious music, the sound of the Jesus Movement was solidly rock and roll. A direct legacy of the movement was the contemporary Christian music industry, which exploded in the following decades. Worship services were typically charismatic, informal, and emotional. An intense interest in end times and apocalyptic prophecy pervaded the Jesus Movement, primarily inspired by Hal Lindsey’s book The Late Great Planet Earth. A popular message of the movement was “Repent! Get ready! Jesus is coming back soon!”

At the height of the Jesus Movement, adherents were estimated to number anywhere between 30,000 to 3 million people. Many of the early founders of the movement—Ted Wise, Lonnie Frisbee, Chuck Smith, Larry Norman—came from Southern California. Other prominent groups sprang up in Seattle under Linda Meissner (the Jesus People Army) and in Milwaukee headed by Jim and Sue Palosaari (the Jesus People). An offshoot of the Milwaukee movement later grew into the Jesus People USA, which eventually settled in Chicago. This group is one of only a few remaining Christian communes with roots in the original 1970s Jesus Movement.

Other outcomes of the Jesus Movement that reflected the influence of the larger secular counterculture were events like beach baptisms and open-air Jesus concerts. Jesus people coffee houses featuring live music, prominent periodicals such as Right On!, and religious bumper sticker slogans were all trendy elements of the movement.

Eventually, by the late 1980s, the Jesus Movement disintegrated in two directions. One portion became increasingly doctrinally unsound and alienated from both the Christian community and the larger society. The other segment was absorbed or reabsorbed into many various Christian groups such as the Calvary Chapel Association, the Vineyard Movement, Jews for Jesus, and the Christian World Liberation Front. I personally have much admiration for Calvary Chapel churches.

Like most revival movements, the Jesus Movement was relatively short-lived but left its mark on Christian history, rejuvenating a portion of the body of Christ through its music, informal worship style, and appeal to young people.

Many people believe that we are starting to see a similar type of movement arising today. There are “pockets of revival” in many places as God is moving through the power of His Holy Spirit! We believe that God responds to the prayers of the righteous. Let’s keep praying and contending for revival in our nation and world in Jesus’ name! We believe its coming and that turning our hearts back to God is the only way to see real and lasting change!

As with past U.S. leaders, President Joe Biden’s new Oval Office decor hints at the landscape of attitudes that are likely to reflect the tone and priorities of his administration. “It was important for President Biden to walk into an Oval that looked like...

END_OF_DOCUMENT_TOKEN_TO_BE_REPLACED

The long-disputed Keystone XL pipeline’s construction was halted Wednesday after President Joe Biden revoked the construction project’s permit. Keystone XL President Richard Prior said over 1,000 jobs will be eliminated in the coming weeks. “We...

END_OF_DOCUMENT_TOKEN_TO_BE_REPLACED

News Analysis The formation of a totalitarian state is just about complete in America as the most powerful public and private sector actors unify behind the idea that actions to stamp out dissent can be justified, according to several experts on modern totalitarian...